This method is a new concept designed for those who are had allergies to make up or women who doesn’t have time for make up. As well as those who had scars on their faces, semi-permanent makeup also covers unwanted scars. Korea Semi Permanent Makeup makes a great sensation in the world.
In addition to the significant advantages of the semi-permanent make up, it also covers inappropriate tattoos with natural pigments. It will last about one to two years, and it fades out due to metabolism of the skin cells, dead cells shedding off as well as the color fades along with, so it is 100% safe.

Korean Semi-Permanent makeup is divided into four categories, eyebrow, eyeliner, lip and hair line. Compares to the trandctional semi-permanent makeup, the Korean style seems to look more natural like you are born with it, and the style is more suitable for Asian people, since K-pop has become a big hit in Asia now days, especially the Korean style of make up and fashion style, Korean semi-permanent makeup also suits K-pop style well as any other style. It makes women look more gentle and beautiful.

Korean Semi-Permanent makeup eyebrow is different than the old style eyebrow tattooing, the tattooing way is using the needles to tattoo into the skin, it hurts and the color turns blue or color changes after a few years. Korean Semi-Permanent makeup is processed with special machine and FDA approved natural pigments, you won’t feel any pain at all during the whole process. Since tattooing is injected into the deeper layer of the skin, once the color changes, you need to use laser to remove the bad colors, and for people who go for Korean Semi-Permanent makeup, they don’t need to worry about color changes since the natural pigments were injected into the top layer of the skin, the color will automatic fades out after two years and color doesn’t change, it will only goes lighter and slowly fades.

Korean Semi-Permanent makeup eye line is suitable for women who are not very good at using eyeliners, it also suitable for women with less eyelashes. After having the semi-permanent eye liner, you don’t need to worry about melting off your make up or going under the water with makeup. It will also makes your eyes look bigger and more charming, that’s why Semi-Permanent make up became a bit hit in Korea for celebrities and young women. 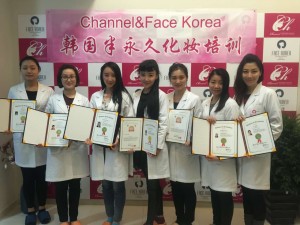