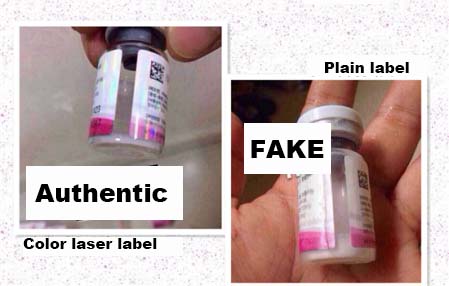 A guide on how to distinguish between authentic Meditoxin and fake

The expiration date and the production batch number on the outer packaging of the authentic Meditoxin, they are print as a stamp alike fonts, like continuous, all the font size are the same. While the fake one looks like they are printing one by one, the font looks intermittent, font size looks a little different. You also have to look at the thickness of the packaging font, the authentic one came with a thicker font. This is the first check point.

Check point five: Look at the form of the botulinum toxin appears on the bottom of the bottle

Many people don’t know how to distinguish between authentic Meditoxin powder and fake one. In fact, the production technology of Meditoxin type A botulinum toxin is very similar to Botox in the United States. The purified botulinum has a foggy sensation, and the powder rarely surrounds the bottom.

The fake meditoxin came with a lot of the white freeze-dried powder on the bottom of the bottle, most of the these fakes are made in China, so technology can’t make it transparent and foggy.